Rows of verses by the great poet-lyricist Athanasius Fet (1829-1892) “My Genius, My Angel, My Friend...” became the slogan of the World Festival of National Cultures and Arts “World Folk Vision” and is part of the cultural layer of time.

"World Vision" presents a valuable award in the form of a statuette (sculpture) symbolizing the image of the Guardian Angel. The sculpture is original and compositional, made of bronze: Weight of the award 5 kg; Length 250 mm; Width 200 mm; Height 530 mm.

There is a laurel wreath in the left hand of the sculpture "Genius of Culture". Laurel is a symbol of glory, triumph and victory. Being an evergreen plant, the laurel symbolizes constancy, eternity and immortality. In Antiquity musicians, speakers and poets sought possession of a laurel wreath. The word "laureate" (Latin “laureates”) means "crowned with a laurel." The laurel crown as an element of sculpture, symbolizes the authentic, timeless talent of the awarded.

In the legends of ancient Rome there was a spirit-protector (patron) whose guardian angel was called "Genius." The ancient Romans believed that a genius is born with a human after which it determines his fate and accompanies him through life.

In many religions of the world there are Geniuses (guardian angels) in one form or another. These creatures are considered saints, extremely important for humans, powerful and peaceful. Their main purpose is to protect the person from all misfortunes and troubles.

Geniuses are indisputable representatives of world culture and truly constitute the soul of all world history. Being representatives of world culture, geniuses to this day remain its figurative carriers and creators. They pray to the spirits-defenders and ask for help in difficult life situations. In addition, it is believed that they should be addressed before serious events: exams, competitions, contests, competitions.

The word “Guardian Angel” came to contemporaries from Greece. In Greek, the Guardian Angel means "messenger" - the one who brings the news of victory.

Oddly enough people knew about the existence of angels long before the advent of religion. Almost all the peoples of the world believed in the existence of invisible entities that helped people. The Persians called their guardians "Feruers," in the Sufi religion they were "muvakkali." In Islamic literature angels are most often referred to by the term "malak" - the messenger.

The most complete information about angels is contained in the Christian religion as well as Judaism (Bible and Thor). The above texts describe the invisible creatures that protected people. They have a beautiful appearance and are more perfect than people. Ancient legends say that Angels were created before humans so they have special abilities.

All Geniuses (angels) make up the "heavenly army." The main purpose of angels in many religions is to protect the world in which people live. These entities can control the elements, people, animals due to the special “grace” that gives them strength.

A genius is a culture worker. Genius is a higher ability for creativity. Creating its symbolic model of the World Festival-Contest of National Cultures and Arts “World Folk Vision” as the mouthpiece of the era, the official anthem was approved. The anthem is based on the first classical preserved musical work (romance) of the greatest world genius, composer Pyotr Tchaikovsky (1840-1893) to the poems of the outstanding poet Athanasius Fet “My Genius, My Angel, My Friend ...” which symbolize the genius of inspiration in culture and art.

Dream, think and get inspiration for your life along with “World Folk Vision”! 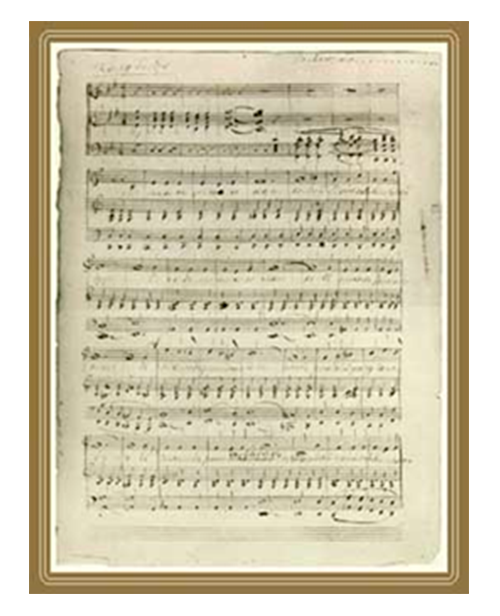 Are you here like a shadow fading?
My spirit, my angel, my friend,
And are you  with me softly speaking,
Swaying softly while you suspend?

And give me timid inspiration,
My lovely affliction you mend,
And give a calm imagination,
My genius, my angel, my friend ...