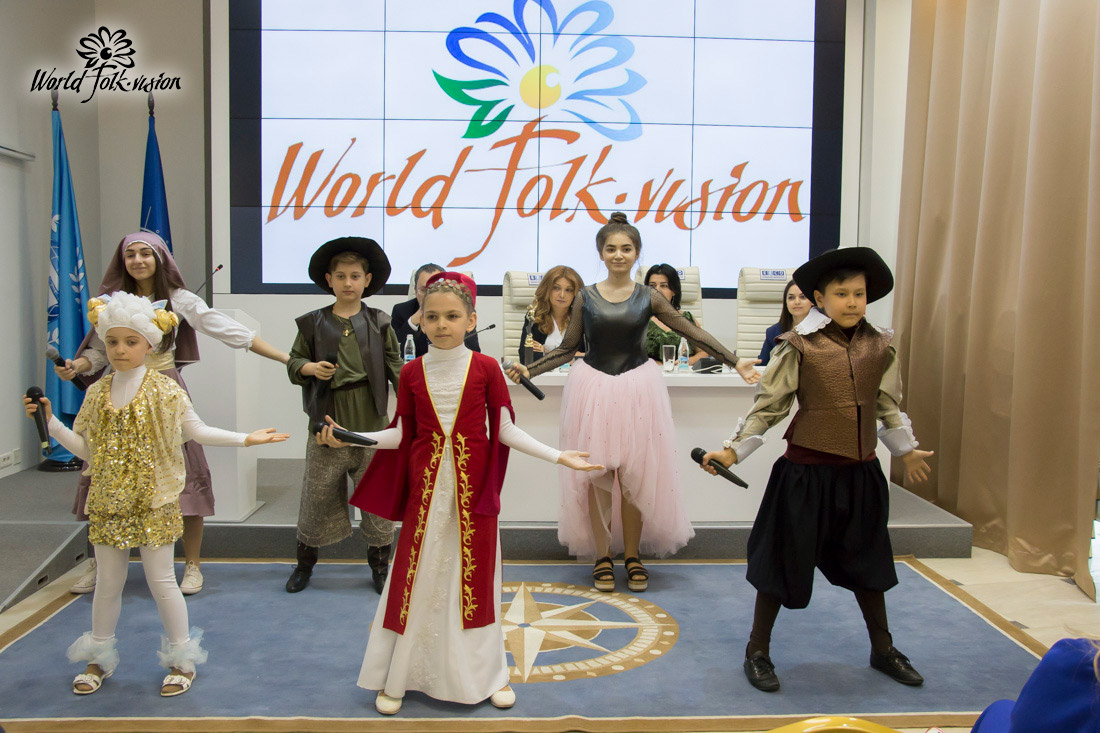 To questions of international journalists answered Zhanna Barsegova (Eurasian Commissioner for Culture and International Humanitarian Cooperation of the EECO and the coordinator of the project “WORLD FOLK.VISION – kids”), as well as the producers of the Russian Center “Young Artist”, the operators of the Russian part of the international project Merine and Zina Melikyan.

The Eurasian commissioner of the Eurasian Economic Cooperation Organization (EECO) Zhanna Barsegova told the story behind the project.

The World Festival-Contest of National Cultures and Arts WORLD FOLK.VISION – kids is part of the WORLD FOLK.VISION project, established on August 3, 2017 by the Council of Eurasia on Culture, Science and Education in the framework of the implementation of the provisions of the Rome Convention “On Cooperation in Eurasia on culture, science and education”.

In 2018, the right to conduct WORLD FOLK.VISION – kids was granted to the Russian side as a result of competitive selection.

“WORLD FOLK.VISION is a series of international specialized competitions-festivals of national cultures and arts, which are held under a single worldwide international brand” said Zhanna Barsegova. 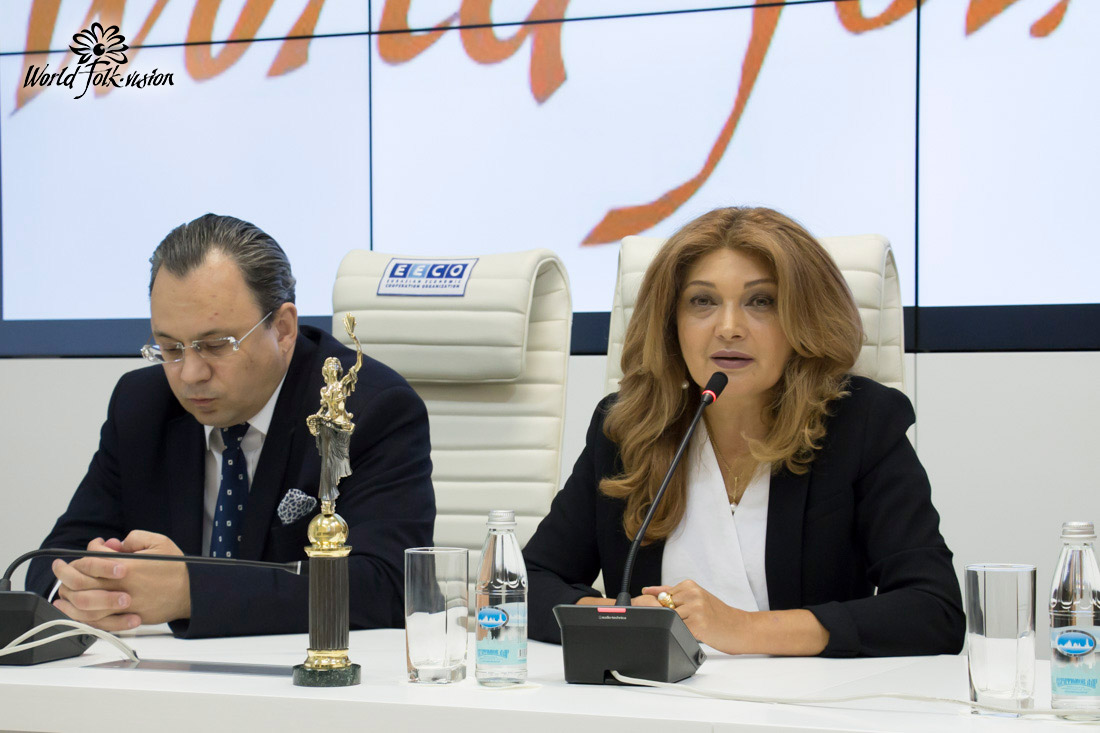 According to speech, "WORLD FOLK.VISION" is a new global project, where about 80 countries are already registered. Based on the results of the national competitive selection, on June 1, the final event will be held in different countries around the world - a big gala concert of the winners of WORLD FOLK.VISION-kids. The closest event in Russia will be devoted to children's creativity. Winners will be awarded with "WORLD FOLK.VISION" awards. Each winner will be awarded a unique certificate confirming the status of the winner of the World Festival-Contest of National Cultures and Arts WORLD FOLK.VISION-kids recognizing his contribution to the development of world culture for the purpose of attractiveness and sustainable development of countries and peoples.

This year the voting will start on the selection of the winners of the children's contest "WORLD FOLK.VISION - kids" in 80 countries.

The operator of the “WORLD FOLK.VISION – kids” is the producing center “Young Artist” from the Russian Federation, which has solid experience in holding similar events.

“A huge number of representatives from different countries are already showing great interest in the project. Negotiations on state participation with such countries as the Republic of Turkey, Malaysia, the Republic of Armenia, the United Arab Emirates, the Federative Democratic Republic of Nepal are ongoing at this stage, where various regional stages of this world competition are planned” explained Zhanna Barsegova.

The Eurasian commissioner added that the peculiarity of the project is that the participants are not representatives of the country, but representatives of specific regions from different countries, which allows us to disclose "the entire palette and diversity of cultures of each country separately." One country can represent several participants from different regions of this country.

“At the moment, the project WORLD FOLK.VISION has 47 national directorates in different parts of the world. Representatives from many countries express their readiness to create national directorates to hold large-scale creative festivals of high level,” added Zhanna Barsegova, finishing her presentation with the slogan of the project “Wars end when culture and friendship between nations begin”.

"The uniqueness of the project lies in the fact that cultural exchange takes place on this international platform, regardless of age, faiths and nationalities. In addition, it provides an opportunity to show not only the country, but also regions and individual small nationalities from around the world, "said Zhanna Barsegova.

Thus, according to Zhanna Barsegova, the project should attract great interest from the point of view of tourism development on an international scale, which is one of the priorities of the organizers of the World Festival-Contest of National Cultures and Arts “WORLD FOLK.VISION-kids”.

The owner of all intellectual property produced within the framework of the World Festival-Competition is the non-governmental, non-political body of the Eurasian Council for Culture, Science and Education.

Each country has a national jury. The voting results of the national jury are announced by the authorized representative in turn from each country. The nationality of the performer does not matter. Any performer can represent any region of the country, even without being a citizen of the country. Political statements are forbidden; It is not allowed to use obscene or offensive language and commercial messages. A member of the national jury must be a representative of the music industry: a radio presenter, a singer, a composer, a text writer, a music producer or a teacher of music and other arts. All jury members must be citizens of their country, which they represent. Formally, the style of the participant's performance is not limited, the choice of the genre of the performed music remains for the performer and the national directorate, who selects the specific performance.

The emblem of the festival-contest was chosen during the international competitive selection. The emblem shows an inscription in English WORLD FOLK.VISION and a flower "cornflower", a beautiful, simple flower that does not require special care. Its bright colors will not only adorn the international lawn, and definitely will raise the mood. The flower of the festival-contest grows on all continents of the world, which is very symbolic. There are about 500 kinds of cornflowers. Cornflower can be blue, purple, burgundy, white, black, yellow, which symbolizes the different colors of the nations of the world. Cornflowers have magical properties. It is believed that they protect a person and his house from evil spirits. The flower is sung in many folk songs and is rightly considered an ornament of fields and forests.

“The number of people wishing to take part in the festival-contest is constantly growing. Applications for participation are already calculated not in tens, but in hundreds” Zina Melikyan stated.

According to the idea of ​​the organizers, the venue of the festival-competition can be the capital of the country, region, or the largest administrative center with well-developed infrastructure and transport logistics.

“The organizers raise high security requirements in the places of the festival-contest. In order to ensure the safe and high quality of the activities carried out within the framework of the WORLD FOLK.VISION, healthcare, trade, communications, transportation, consumer services, the mass media, various public organizations will be compulsorily involved in their organization and conduct, with the current national legislation are assigned the responsibility to ensure the order of the events” said Zhanna Barsegova.

The final decision on the selection of the venue for the next WORLD FOLK.VISION festival-contest in a particular country will be taken only after receiving the fullest guarantee from the national authorities on observance and provision of unprecedented security measures in the venue of the events.

Starting from 2018, every festival-contest will be held under its own slogan (theme). The Russian children's stage is held under the slogan "Happiness".

Considering that at the festival-contest the jury members can vote not for specific performers, but for the region of the country that they represent, therefore the voting system in the festival-contest consists in summing up the points received from the jury separately in each country. In order not to significantly affect the final result of the vote, later the votes of all the national juries are summed up.

Each continental or regional stage of the World Festival-Competition ends with the final gala concert, at which the winners are awarded.

“We express confidence that the participants and guests of the Russian stage of the World Festival-Competition WORLD FOLK.VISION will have bright, unforgettable impressions, the joy of communication and meeting with real art,” Merine Melikyan stated.

“At the beginning of the new millennium, it is especially important to preserve the deep spiritual ties of the peoples of the world, to develop common cultural traditions. I am confident that holding the World Festival-contest WORLD FOLK.VISION in Moscow will fully serve these honorable aspirations” said Zhanna Barsegova.