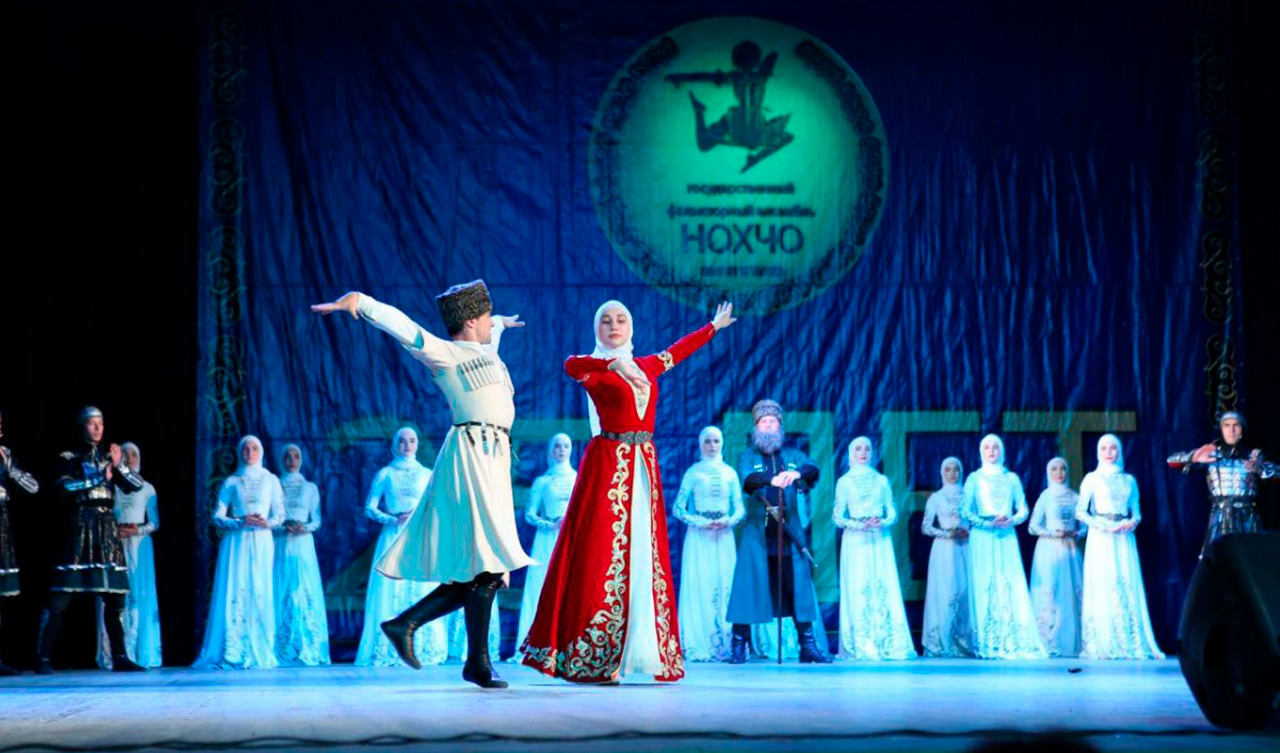 The Chechen State Folklore Song and Dance Ensemble "Nokhcho" was created on December 15, 1990 under the Union of Theater Workers of the Chechen-Ingush Autonomous Soviet Socialist Republic. Initially, it was called the Theater of Folk Dance.

April 4, 1991, the premiere of the theatrical performance “A treasure of Chechen traditions” took place, which brought great success and recognition to the audience. Thanks to this, on April 22, 1992, the ensemble received the status of a state, thereby confirming the high professionalism and creative identity.

The tragic events that took place in the Chechen Republic in 1999 caused a forced break in the ensemble. The collective received its rebirth in 2001 as the state song and dance ensemble “Nokhcho”. A new stage in the history of the ensemble began with a new leadership and a new composition, but with the same striving for success.

On April 29, 2010, the presentation of the new concert program “Nokhcho” took place under the name “Daimekhan Oramash” (translated into Russian as “Roots of the Fatherland”). Along with the previous ones, it included five new choreographic productions, as well as vocal compositions.

Nokhcho - youth ensemble. Here work boys and girls aged 14 to 25 years. For a short period of its existence, he established himself as self-sufficient, having the prospect of becoming a leading creative team in the Czech Republic. The concert performances of Nokhcho are distinguished by their unique creative style, compositional diversity and youthful enthusiasm. The ensemble’s creativity is based on such features as the brightness of character expression and the original manner of performance.

This dance group has extensive experience touring. He successfully takes part in many festivals and competitions at the regional, all-Russian and international levels, and also actively participates in various cultural events and events. Among them - the XVI festival of national communities “Good brotherhood is the best wealth”, the city of Naberezhnye Chelny, Tatarstan, 2009; III Youth Delphic Games of Russia, Volgograd, 2009; International Children and Youth Festival of Young Talents, China ... .; X inter-regional festival "Peace to the Caucasus", Anapa, 2012; International festival "FOMGET" Ankara, Turkey.

As one of the best teams in the Chechen Republic, the Nokhcho ensemble participated in the youth forum “Youth for Peace in the Caucasus”, which took place on Mount Mashuk (Pyatigorsk) under the patronage of the Presidential Envoy to the North Caucasus Federal District A. Khloponin. For its outstanding performance, Nokhcho was noted with a letter of thanks from the President of Russia V. Putin.

Significant assistance in setting up a new ensemble program was provided by the First Deputy Minister of Culture of the Chechen Republic, People's Artist of the Russian Federation Ramzan Akhmadov. The hard work on the new repertoire lasted almost six months.

The creative process was greatly hindered by the lack of a well-coordinated team, its insufficient professional level, and the lack of the necessary mass for staging large choreographic compositions. Everything had to be decided in the course of work.

On May 30, 2014, on the stage of the Grozny Theater and Concert Hall, Nokhcho presented his latest creative achievements. The task set by the Head of the Chechen Republic Ramzan Kadyrov was completed.

The magnificent program, worthy of the largest venues in the world, was enthusiastically received by the public. The tremendous work done in such a short time, when everything changed dramatically: leadership, ballet, orchestra, choir, stage costumes, received a worthy assessment.

The entire ensemble team worked without rest, not noticing fatigue. These common efforts have borne fruit. The head of the Chechen Republic closely monitored the work of both the new leadership and the artists; moreover, Ramzan Kadyrov took a direct part in the formation of the new image of the ensemble, allocating funds for everything necessary. As a spectator and a strict judge, Razman Akhmatovich expected a result that would allow him to be proud of the high name of Nokhcho. As a true patriot, it is very important for him that Chechen art be truly high.

The presentation of the new repertoire of the state folklore song and dance ensemble “Nokhcho” was a triumph. 17 new compositions were received by the audience with a flurry of applause. The head of the Chechen Republic, Ramzan Kadyrov, awarded Ramzan Akhmadov the highest award of the republic - the Order of Kadyrov - for 45 years of work for the benefit of the Chechen people and for the new Nokhcho program. The young team has declared itself as a very promising, promising.

In 2019, the State Folklore Song and Dance Ensemble “Nokhcho” took part in many Government concerts of the Russian Federation both in our country and abroad. In January 2020, the ensemble took part in the closure of the Year of Russian Culture in the Republic of Turkey.